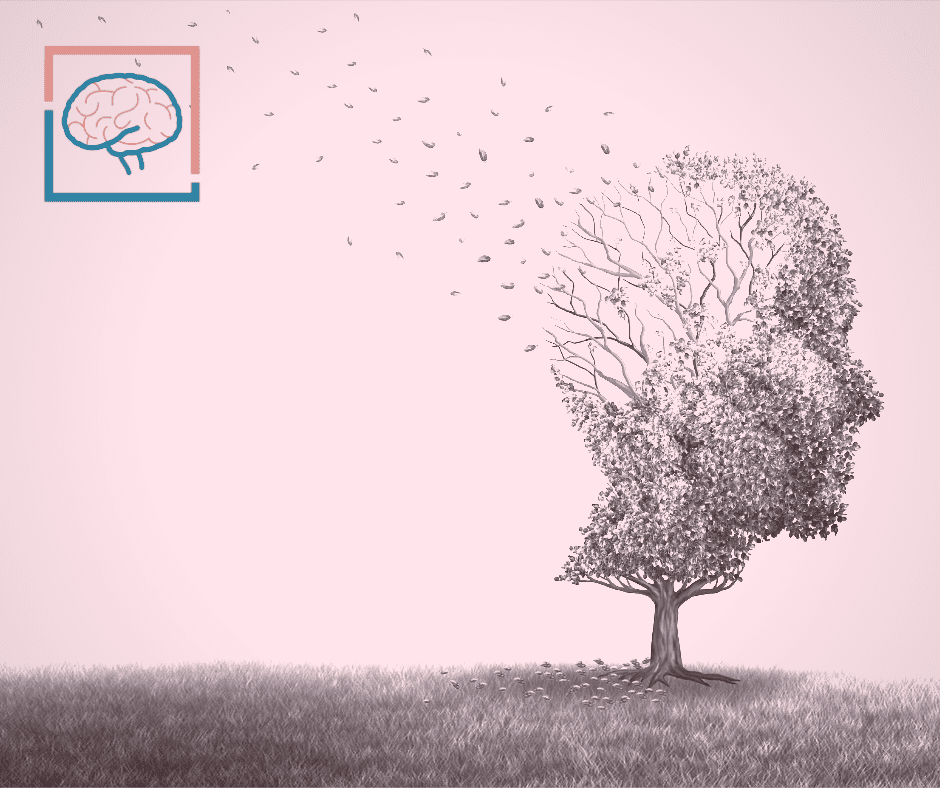 Dementia is an umbrella term, defined as a disorder of mental processes caused by brain disorder or traumatic brain injury. As mental processes decline, memory is impaired, personality may change, and thinking/concentration skills deteriorate.

At what age does dementia usually start? Dementia is most common in adults over 65. However, early- or young-onset dementia (diagnosed at 30-60 years old) may account for 5% of dementia cases.

More than 1/3 of individuals over the age of 90 suffer from some form of dementia.

Does dementia run in the family? Almost all forms of dementia are not genetic.

Below, we cover the 16 most common types of dementia:

In Alzheimer’s disease, a buildup of amyloid plaque and tau proteins on the brain leads to rapid cognitive decline.

Early signs of Alzheimer’s disease include:

Alzheimer’s can’t be cured or effectively treated in many cases.

However, by addressing a combination of 36 lifestyle factors identified by Dr. Dale Bredesen, it is possible to reduce your risk of Alzheimer’s disease.

Alzheimer’s disease is the most common type of dementia, affecting one of every 10 older adults aged 65 and older.

Also known as “subacute spongiform encephalopathy”, Creutzfeldt-Jakob disease is inherited in about 8-15% of cases. However, the overwhelming majority of cases occur spontaneously when misfolded proteins force other proteins to be misfolded. The initial cause of this process remains unknown.

More than two-thirds of people with this disease die within a year of diagnosis.

Early symptoms of Creutzfeldt-Jakob disease include:

Later symptoms of Creutzfeldt-Jakob disease include:

Dr. Frederich Lewy discovered Lewy bodies in the early 1900s. Alpha-synuclein protein, the chief component of Lewy bodies, is widely found in the brain, although its intended function isn’t yet known.

No risk factors or causes of Lewy body dementia have been identified. Healthcare experts are fairly confident it isn’t genetic or based on family history.

Symptoms of Lewy body dementia include:

Dementia with Lewy bodies affects more than one million people in the United States alone — making it the third most common of the different types of dementia. It seems to affect slightly more women than men, according to the National Institute on Aging.

Types of FTD and their primary symptoms include:

Rough estimates of FTD prevalence may be as high as 60,000 adults in the United States. Treatments include medication to improve quality of life, but not to reverse frontotemporal dementia.

Also known as “degenerative chorea”, Huntington’s disease is a genetic neurodegenerative disorder that leads to involuntary muscle movements (AKA chorea), personality changes, and dementia over the course of 10-25 years.

Huntington’s is a rare genetic disease. Parents run about a 50% chance of passing Huntington’s to each child they bear.

Symptoms usually begin appearing between the ages of 30 and 50. Patients with Huntington’s may live another 15-20 years after the onset of symptoms.

Vascular dementia is caused by blocked or reduced blood flow to different regions of the brain. This deprives the brain of oxygen and nutrients, leading to symptoms of dementia.

Also known as vascular cognitive impairment, this type of dementia can coexist with Alzheimer’s or Lewy body dementia. Memory loss may or may not be a major symptom, depending on the part of the brain that is affected.

Stroke sufferers who experience immediate cognitive impairment likely have vascular dementia because the stroke deprived their brains of oxygen and nutrients.

A healthy liver filters alcohol quickly. However, when someone consumes excessive alcohol, their liver cannot filter the alcohol fast enough. This can lead to immediate, lasting brain changes.

Excessive alcohol causes long-term negative effects on the neurotransmitters in your brain. Almost half of the alcoholics in America present with mild to severe cognitive impairment.

Alcoholism is also linked to several other health problems:

About 5-6% of those with Alzheimer’s develop symptoms before age 65. This is called early-onset or young-onset Alzheimer’s, the most common young-onset dementia.

Working-age individuals (under the age of 65) may also develop these young-onset dementias:

Young-onset Wernicke-Korsakoff Syndrome may be brought on by alcohol abuse and a thiamine vitamin deficiency, so it can usually be prevented with abstinence from alcohol and eating a healthy, balanced diet. Regular exercise may help slow or stop other forms of cognitive decline.

Chronic traumatic encephalopathy (CTE) is a brain condition that results from repeated concussions and head trauma.

It has some similarities to Alzheimer’s, in that CTE happens because of abnormal tau plaque in the brain. However, CTE tau tangles form around small blood vessels and aren’t usually the beta amyloid plaques common to Alzheimer’s disease.

CTE causes dementia symptoms such as:

It’s impossible to diagnose CTE without an autopsy, but initial studies suggest it is very common in athletes in sports like American football.

Lyme disease is a common tick-borne bacterial infection diagnosed in 300,000 Americans each year. While the early stages of Lyme can be reversed with proper antibiotic therapy, many cases go undiagnosed and can lead to a lifetime of chronic health problems.

Some cases of neuroborreliosis may be misdiagnosed as Alzheimer’s disease, like with musician and actor Kris Kristofferson. This condition may also present similar to a stroke, which is why cerebrospinal fluid (CSF) is necessary to make a proper diagnosis of neuroborreliosis.

HAND is one of the few conditions directly caused by HIV, whereas most complications of HIV come from opportunistic infections.

With the growing popularity of highly active antiretroviral therapy (HAART), the incidence of HAND is declining in developed countries. HAART may prevent or delay the onset of HAND, or improve cognitive function in those who already have HAND.

In Western countries, HAND prevalence may be as high as 24% of HIV-infected individuals.

Mild cognitive impairment is the general term for early signs of dementia, or pre-dementia. This is not a normal part of aging.

MCI is a slight but noticeable cognitive decline, namely memory and thinking. It can be noticed by family members or caregivers, but shouldn’t directly impede the individual’s ability to go on with their daily life.

There are many potential causes of MCI, including some we don’t fully understand. Risk factors are basically the same as the risk factors for dementia in general: older age, family history of dementia, and cardiovascular disease.

About 15-20% of people age 65 or older have MCI. Because this is an early warning sign for Alzheimer’s or other dementias, seek medical advice right away if you or a loved one exhibits MCI.

At least 10% of those suffering from dementia have more than one type of dementia. This is called “mixed dementia”.

The most common form of mixed dementia is the amyloid plaque buildup of Alzheimer’s coexisting with the blood vessel issues connected to vascular dementia.

Normal-pressure hydrocephalus refers to an abnormal buildup of cerebrospinal fluid in the ventricle areas of the brain.

It may be caused by:

Normal-pressure hydrocephalus may be treated by surgically placing a shunt in the brain to drain the excess cerebrospinal fluid.

Posterior cortical atrophy (PCA) describes the progressive degeneration of the outer layer of the brain. It affects your ability to process visual information.

PCA may be a distinct disorder or a variant of Alzheimer’s. It usually begins between the ages of 50 and 65, whereas Alzheimer’s often develops after the age of 65.

Many PCA patients show amyloid plaque and tangles like in Alzheimer’s, but in a separate part of the brain than Alzheimer’s.

Some researchers estimate 5-15% of Alzheimer’s patients suffer from PCA as well, but because the standard diagnostic criteria have not been established, it’s difficult to say.

Also called Gayet-Wernicke syndrome, Wernicke-Korsakoff syndrome is a type of dementia characterized by the following symptoms:

Wernicke and Korsakoff syndromes are related conditions that often develop due to vitamin B1 (thiamine) deficiency. Most cases occur in alcoholics. Cutting out alcohol and supplementing thiamine may slow or stop cognitive decline, especially at early stages.

Some experts believe that Wernicke and Korsakoff syndromes are stages of the same disorder, whereas some believe they are separate but closely related.

About 1 or 2% of the worldwide population suffers from Wernicke-Korsakoff syndrome.

If you’re worried about dementia…

There are more options for dementia than just experimental drugs. Because most dementia treatments have about a 1% chance of success, the need for novel approaches to dementia treatment is critical. Though there are many types of dementia, the most common are often preventable with targeted lifestyle changes.