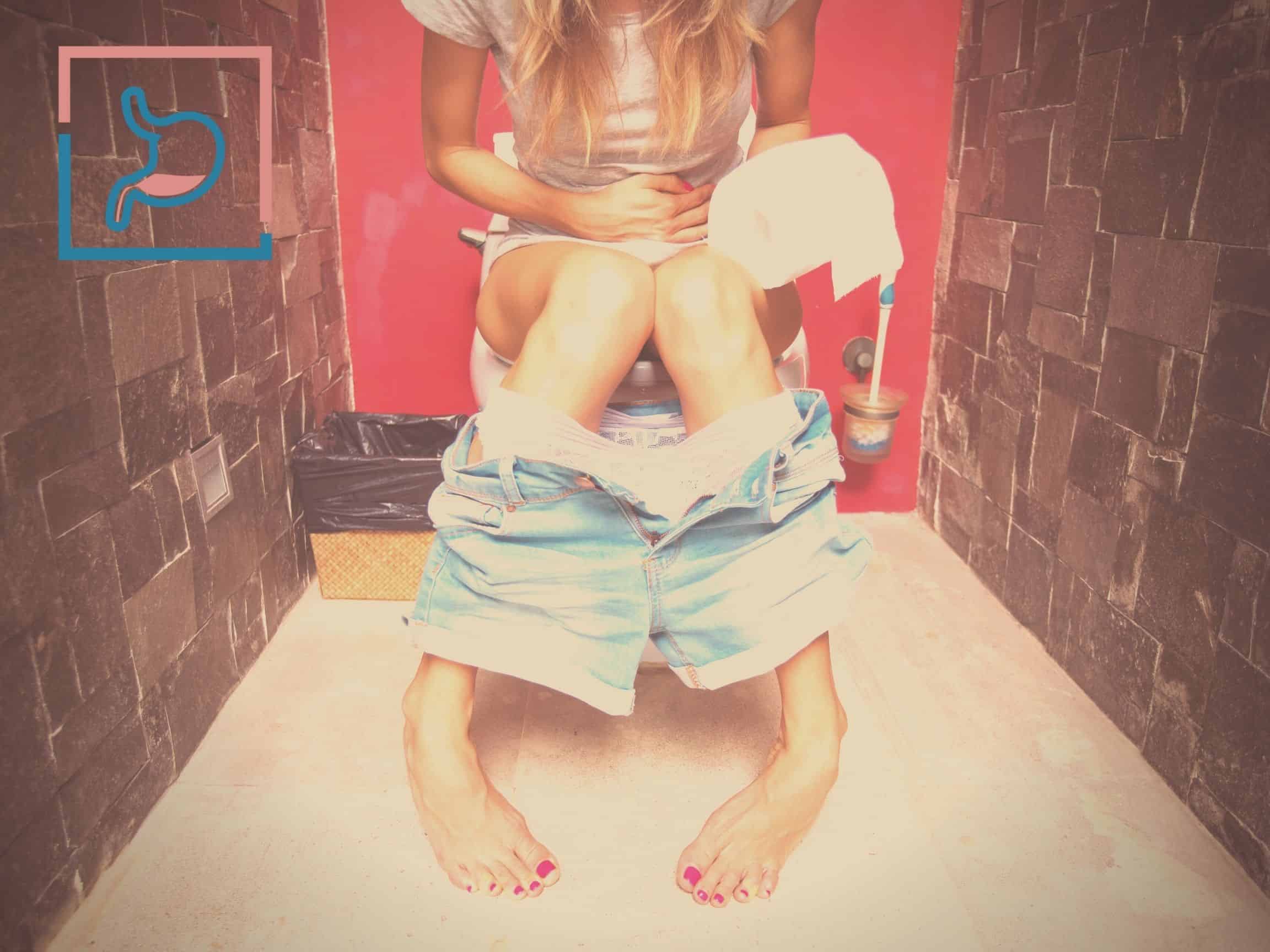 Irritable bowel syndrome (IBS) is an intestinal disorder that affects up to 11% of the global population. Among IBS sufferers, only about 30% seek treatment from a physician for their IBS, particularly if those symptoms present alongside other conditions.

Some women experience worse IBS symptoms during their menstrual cycles, making this condition even more difficult to diagnose.

While many symptoms overlap with symptoms found in male IBS sufferers, some are unique to women. There are 13 common IBS symptoms in females to look out for to assist in diagnosis and plan for treatment, including:

Changes in bowel habits are a common symptom of IBS in both men and women. Diarrhea is a less common IBS symptom in women than men, although some women experience more frequent loose stools around their menstrual cycle.

An increase in mucus in the stool is another common symptom of IBS.

Keep in mind that diarrhea is also a common symptom of inflammatory bowel disease (IBD), or chronic inflammation of the gastrointestinal (GI) tract. IBD can present as Crohn’s disease or ulcerative colitis, conditions sometimes mistaken for IBS.

Unlike IBS, a physician may recommend a colonoscopy for IBD as both a diagnostic tool and to see the extent of inflammation in the bowel.

Chronic constipation is more common in women than men. More women present with the constipation-predominant (IBS-C) type of the condition.

This may be due to various factors, including anxiety, hormone production, and bowel motility.

Women report more anxiety than men. Hormonal differences and how food moves through a woman’s small and large intestine may also impact IBS symptoms in females.

Bloating, excessive gas, and a feeling of fullness in the belly are common IBS symptoms in both men and women. Gas and bloating can become more pronounced during certain stages of menstruation in women.

Discomfort with expelling gas is one of the less-discussed side effects of IBS that can significantly impact a patient’s quality of life.

Women with IBS frequently report chronic pelvic pain alongside other symptoms of irritable bowel syndrome. In one study, 40% of female participants with pelvic pain met the criteria for IBS.

It’s important to note that pelvic pain affects about 15% of women of childbearing age. This pain may be due to comorbid conditions like endometriosis or severe menstrual symptoms. The connection here is that pelvic pain is often just one of many symptoms in women with IBS.

What does IBS feel like for a woman? IBS for a woman can feel like chronic abdominal pain, cramping, and worsened PMS symptoms.

Researchers point to hormonal changes and the effects of progesterone during a woman’s cycle as possible reasons why PMS symptoms worsen.

Pain sensitivity seems to increase during menstruation as well, potentially exacerbating cramping from both IBS and menstruation.

Irregular periods and contraceptives do not seem to affect IBS symptoms.

Women with IBS are more likely to experience urinary incontinence (a lack of control over urine output) and overactive bladder (OAB). This can result in more frequent, urgent urination, painful urination, and/or an urge to urinate throughout the night.

Women are more at risk of developing OAB than men, and treatments for this often strengthen the pelvic floor.

Chronic constipation, straining during bowel movements, or diarrhea may cause pelvic organ prolapse (POP). POP occurs when the muscles and tissues supporting the pelvic organs weaken. This can cause those organs — the uterus, bladder, or rectum — to drop or fall out of place.

Women are more at risk for the condition as it can also happen following difficult pregnancies and labor, or due to lower estrogen levels after menopause.

IBS is linked to sexual dysfunction in both men and women. On top of abdominal pain associated with the most common IBS symptoms, many women with IBS also report pain during sexual intercourse.

A decreased sex drive and low overall sexual satisfaction are also more common in women. This may be because of the discomfort involved with many of the hallmark IBS symptoms.

Fatigue associated with a lack of sleep, even insomnia, is a common symptom of IBS in women.

A lack of restorative sleep can exacerbate other IBS symptoms and cause quality of life concerns.

Women experience a variety of mental health concerns associated with IBS symptoms, including increased rates of depression and anxiety.

Anxiety and other mood disorders are closely associated with IBS in multiple ways. For instance, anxiety may trigger IBS symptoms, like stress-induced diarrhea.

But new research suggests that there might be a shared genetic link between anxiety, depression, neuroticism, and IBS.

There is stress involved with managing symptoms related to the digestive system, including constant planning for bathroom access. That stress can be anxiety-producing. This causes a cycle where IBS causes a sufferer anxiety, and that anxiety exacerbates IBS symptoms.

Researchers suggest gastrointestinal clinics screen for mental health conditions as part of a complete IBS treatment plan. Treating those conditions can often get to the root of IBS symptoms.

Women diagnosed with IBS are at a higher risk of developing endometriosis. The painful condition causes tissue normally found inside the uterus, or endometrium, to grow outside the uterus.

Women who receive a hysterectomy to alleviate endometriosis pain are at a higher risk of developing IBS, too.

IBS symptoms like abdominal cramping, bloating, and irregular bowel movements can cause a loss of appetite. This can lead to weight loss if you take in fewer calories than you should.

Some IBS sufferers also lose weight from anxiety over foods that may trigger their symptoms.

This isn’t an exhaustive list. An elimination diet and food diary are part of the 5-step process described in our treatment recommendations.

Risk Factors for IBS in Women

Women face a number of additional risk factors for IBS, such as:

Diagnosing IBS can be challenging, particularly in women on their menstrual cycle. Cramping associated with menstruation may be confused with abdominal cramping and vice versa.

There is also no blood test to diagnose IBS. A healthcare provider will use the Rome criteria for a proper IBS diagnosis in both men and women. The method analyzes your symptoms to determine whether you’re suffering from IBS or other gastrointestinal disorders.

Abdominal pain for 6 months or more presenting with 2 out of 3 of the following criteria points to a positive IBS diagnosis:

From there, your physician will determine the type of IBS you have. There are 4 main types of IBS:

Your treatment plan depends on the type of IBS you’re suffering from and the cause of IBS symptoms.

The Best Way to Treat IBS

While there are a variety of alternative treatments out there like hypnotherapy and cognitive behavioral therapy, those treatments come with varying levels of research-backed success.

At PrimeHealth, we know you can cure IBS if you identify the root cause of your symptoms. To do this, we lead patients through a 5-step process:

The best treatment for IBS is a personalized, functional approach. Are you ready to say goodbye to your IBS permanently? Schedule a free telehealth appointment with us today to take control of your health and your IBS for good.

SIBO Test: What To Expect, How To Prepare & Next Steps
September 21, 2021
Recent posts
PrimeHealth Denver
Soyona Rafatjah, MD is a board-certified Family Physician who practices Integrative and Functional concierge medicine at Prime Health in Denver, CO.